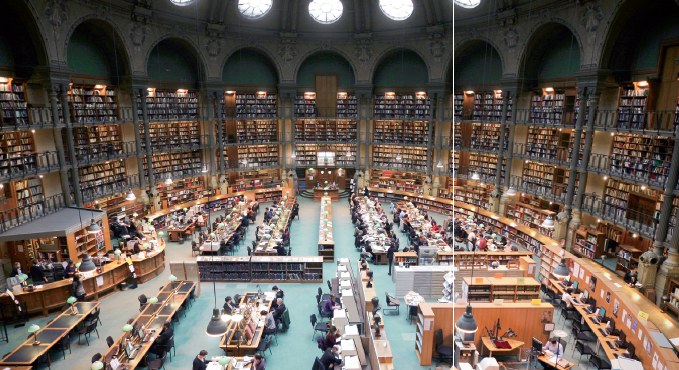 A conference on ”Turkish Manuscripts in National Library of France” was held as part of efforts to improve the cooperation between Yunus Emre Enstitüsü (YEE) and the National Library of France (BnF). İn Charge of Turkish Printed Works and Manuscripts in National Library of France Sara Yontan and Head of Oriental Manuscripts Department Laurent Hericher visited Turkey for the event. İn the conference, it was marked that the National Library of France features Turkish collections dating back to centuries ago including the letter written by Sultan Suleiman the Magnificent to French King François to Antoine Galland who rewrote the Turkish language of 1600s in Latin letters. The library also features an Arabic-Turkish dictionary written in Hebrew letters in Istanbul. Turkish manuscripts are in various genres such as history, Islam, biography, story and poetry. Addressing that some of the works have been transferred to the digital medium, speakers explained that the copies of other works can be accessed by applying to the library. Experts pointed out that only 244 of Turkish manuscripts have been adapted to digital media, and marked that valuable works such as the agreement Said Efendi sent to imperial librarian Bignon, are preserved in the library.

HOW DID THE MANUSCRIPTS END UP HERE?

İnitially, 150 Turkish manuscripts entered the National Library of France after the institution purchased two private libraries in the 17th century. In the following century, the royalty sent official envoys from France to the Ottoman to purchase books. This way, Turkish books entered the National Library of France. Printed works entered the library by way of an agreement from 1729 onwards, after the first printing operation in Arabic alphabet was carried out in the Ottoman Empire. 17 books published in Müteferrika Publishing House constitute the core of the printed collection. There are also books collected by people who visited the Ottoman Empire as envoys or on other duties.

“One of the most interesting manuscripts is Antoine Galland Diaries who stayed in Turkey for manyyears in the 17th century. This is a Turkish book written in 1686 by Antoine Galland, famous in France for his translation of Arabian Nights into French. We can say that this is a transcription of a work by Hezarfen Hüseyin about the Ottoman State Organization. There are currently numerous other works in our libraryyou may find interesting.”