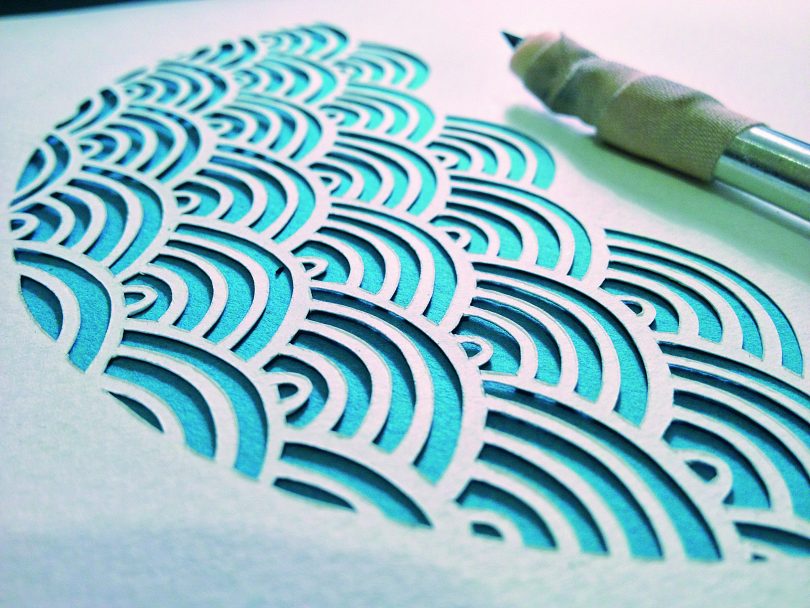 Katı’ art became a synthesis of the Ottoman culture, and spread to Europe over the Ottoman Empire.

The art historian Celal Arseven describes katı’ art finely in his work titled Encyclopedia of Art: “Works made by cutting out texts or motifs on paper or leather using sharp knives, and pasting the cut-out and the cut piece separately onto another piece made of paper, leather or glass.”

The first examples of katı’ art in our culture date back to the late 15th century, the Ottoman Empire period. Although this art originated in the Far East, specifically China, we Turks, skilfully synthesised this art with our cultural background and succeeded to combine it with Chinese, Arabic, Persian and Byzantine influences. Katı’ art became a synthesis of Ottoman culture and spread to Europe over the Ottoman Empire. In addition to the katı’ artists who worked in the palace throughout historical process, there were also artisans and Mevlevi dervishes who were fond of and this art and practised this art outside of the palace. These  people left behind invaluable works and made this art popular among people. In the period of Sultan Mehmed the Conqueror, Efşancı Mehmed’s katı’ version of a garden in Nishapur Album was made with great mastery and elegance. In the 16th century, in the period of Sultan Suleiman the Magnificent, numerous manuscripts were adorned with katı’ art. Benli Ali Çelebi and Abdülkerim Çelebi were the most famous and prominent katı’ artists. In addition, Mehmet bin Gazanfer, Bursalı Fahri, Mehmet Nakşi, Gazneli Mahmut, Vahdeti, Süleyman, Osman Rıfkı and Mehmet Halazade were other important katı’ artists.

Unmatched katı’ works have been produced for many years; however it is the least known and least popular among traditional Turkish book arts. As is the case with other Turkish traditional arts, Distinguished Professor Dr. Süheyl Ünver reintroduced the katı’ art to Turkey. He located the works in Turkey and abroad, learned and taught katı’ art, and ensured this art’s revival. He brought many examples of katı’ art to Europe, making it known there as well. Nowadays, it is our duty to ensure that this art is known by our people, and that they take interest in it. We must contribute by organizing exhibitions, and informative seminars.