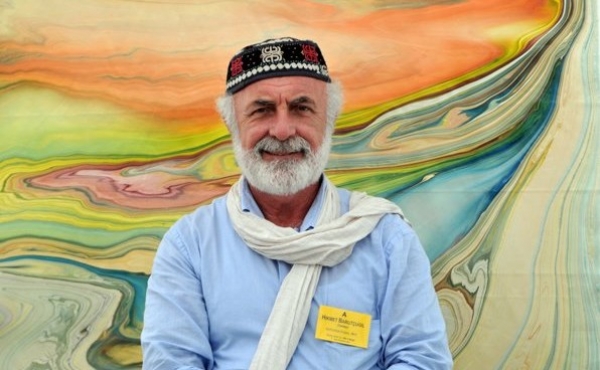 We interviewed Hikmet Barutçugil, one of the best living artists of the unique art of marbling that has spanned the boundaries of our imagination for centuries.

Could you tell us about the synergy between Marbling and imagination?

Marbling is an art as well as a craft. The craft aspect is imitating the old. It is all about making similar ones to previous ones, and copying from those. Everyone with a little hand skill can easily perform it. The goal may be worldly feelings and thoughts such as earning money or fame. There is no need for imagination to follow these strict rules.

However those interested in the art aspect, must conjure up the inspiration from their inner worlds and visually project them on the surface of water. The term contemplation frequently mentioned in Holy Koran, does not merely mean thinking. It means generating ideas through thinking. Because the secret of creation is evolving; in other words progress. Fortunately so, otherwise mankind could not even survive until the Neolithic Age.

The inspiration behind marbling is nature. It is based on getting closer to the creator by imitating created beauties which is seeking the secrets of creation, forcing imagination, and carries away the people to other realms.

The patterns formed on the surface of Marbling basin are very similar to patterns sometimes seen in soil layers, on marbles or stones, in a tree or even in an electron microscope from the space. Marbling may resemble the endless beauty found between micro and macro cosmos. Natural colourings used in marbling are already in harmony we are accustomed to observe in nature.

What do you suggest to the new generation who want to take up this art, as most are trapped in buildings?

Art that has been well pushed out of conscious in the hustle of modern times, may emerge as a tool to reflect the fine feelings, which allows viewing experiences from a different perspective. Just as we appeal to preventive medicine for well-being of our bodies, we must do some things for our spiritual health.

It has been confirmed that personal skills such as coping with stress, acquisition of motivation (encouragement), positive mental attitude, increasing creativity and self-confidence, and effective communication develop each day when you marble. Thanks to Marbling, hearts are opened and purged without having to speak, force or remind.

What is the position art of Marbling in Turkey and around the world?

I can say that not only in Turkey, but around the world, the interest towards traditional arts and marbling rises as a developing trend. Seeing same or very similar things everywhere in the world is no longer exciting. Those who long for local and diverse cultures, tradition developed based on genetics, and ancient, well-established ideas, are curious about the past with the aim of surviving and updating these. The people in search for ancient beauty have revived traditional arts neglected in our recent history and marbling. This way, old styles in marbling have been remembered and become widespread, above doors have been opened to many innovations. That is where the dynamism in marbling was revealed, and it became a focus of interest. I believe that it will continue progressively.