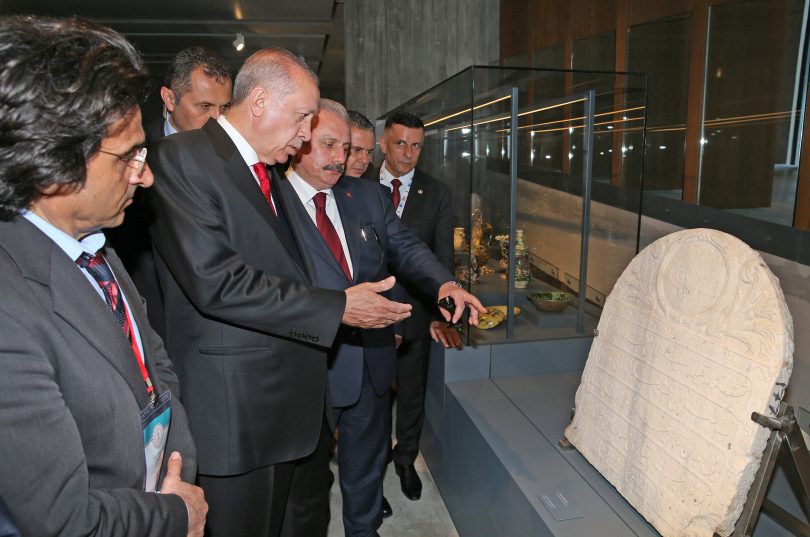 THE TROY MUSEUM THAT WAS OPENED LAST YEAR TAKES US TO A FIVE THOUSAND YEARS-OLD STORY THROUGH LEGENDS. STARTING WITH A LOVE STORY AND ENDING WITH A TEN-YEAR WAR BETWEEN TWO KINGDOMS, THE STORY OF TROY HAS INSPIRED MANY BRANCHES OF ART SUCH AS CINEMA, MUSIC, ART AND POETRY. ARE YOU READY TO DISCOVER THIS ANCIENT CITY, THE HAUNT OF HISTORIANS, TRAVELLERS AND ARTISTS?

The story starts with a beauty contest. The most beautiful among three women is to be chosen, and Paris, son of Priam of Troy, chooses Aphrodite. This choice would be considered the start of a war that would last ten years. But the real event that would cause armies to leave the Greek land and set sail to Western Anatolia was the elopement of Helen, wife of the King of Sparta, to Troy after falling in love with Paris of Troy. Resenting his wife’s elopement with Paris, the king is determined to take Helen back and destroy Troy. But this proves far more difficult that first conceived. During a war that lasts years, important soldier from both sides are killed one by one. For ten years, the Achaeans (the kings of the Greek countries) achieve victories and suffer defeats. But they are not able to capture Troy. So they devise a trick.

Pretending to have given up, the Achaeans hide in theirs ships. They put their soldiers in a giant wooden horse they build, and leave it in front of the gates of Troy. Believing it to be a gift of the gods, the Trojans take this horse in to the city and celebrate. While everyone is asleep during the night, the soldiers leave the horse to open the gates for the army waiting outside, and the city is destroyed in a single night. Leaving a devastated city behind them, they embark on their return journey. However, the Greek army has a hard time returning home. Tossed from shore to shore in a sea journey that lasts years, most of the heroes lose their lives…

The most well-known and detailed among versions of this story that has inspired every field of art for centuries are Homer’s epics the Iliad and the Odyssey, which constitute the foundation of European literature. Setting off from this story, many historians and archaeologists made efforts to discover the city of Troy. Research confirmed that a war was fought between the Greek Achaeans and the Trojans living in Western Anatolia. Certain researchers indicating that this war, on which many legends were composed, lasted ten years, claim that the epic that was transmitted orally from generation to generation was committed to paper many years later, and that Homer, in fact, never lived. However, the dominant view is that Homer composed this epic 2 thousand 700 (or 2 thousand 800) years before our time. However, archaeologists and historians agree that the city of Troy did indeed exist, and was destroyed in wars.

Where is Troy Located?

So, where was this city of Troy, which inspired legends, located?

Historians seeking an answer to this question, and archaeological excavations, bring us to the hill known as Hisarlık, located approximately 5 kilometres to the southern entrance of the Çanakkale straights, close to the Aegean shore.

Based on information provided by Rüstem Aslan, who worked for 30 years on the excavations of Troy, and who currently leads the excavation team, we cans say the following: Founded in 3000 BCE, Troy was a strong city with huge walls and a citadel. Excavations reveal that Troy was destroyed and rebuilt many times. The turbulent story of Troy, which suffered war and earthquakes, leads right up to the Roman Empire.

Going back to Homer’s epics, however, the fall of Troy starting with Helen’s elopement with Paris followed by the ten-year war corresponds to around 1300 BCE. The unforgettable scenes of the war was to meet the audience with the film Troy, which was made in 2004, and which all of us no doubt remember. Starred by Brad Pitt, this film reopened discussions o Troy, which was admitted into the UNESCO World Heritage List in 2008.

Today, the more real and more detailed of the tools of war, costumes and scenery used in that film have been introduced at the Troy Museum that was opened in the region last year. The story of the articles displayed at the museum dates back to the first excavations carried out in the region in 1865. The architecture and treasures of the city of Troy were unearthed during these excavations that lasted years. The excavations reveal that the people lived in great prosperity in Troy, which is older than even 4 thousand years. Among the articles found during these excavations are gold, silver and bronze vessels and many weapons. The war scenes and the Trojan horse figure found on a vase found during the excavations and dated to the 670s BCE are noteworthy.

One of the important works found in the museum is a copy of the Iliad, which had been kept carefully in Topkapı Palace Library, and which is believed to have been made in the 13th century. The oldest copy of the epic is the copy dated to the 10th century, which was taken to Venice after Fatih’s conquest of Istanbul. The other, and best protected, copy is in Topkapı Palace. According to legend, Fatih Sultan Mehmed visited Troy in 1462 and said: “I avenged the Trojans by conquering Istanbul”. Although it is not known whether this was actually said, it is thought that Fatih Sultan Mehmed would have read Homer’s Iliad, a copy of which was found in his library. It is a fact that many Western travellers’ paths went through Troy. This city had started to be mentioned in the memoires of travellers beginning with the 11th century. However, the city’s real story started to change with the excavations carried out there. During the excavations he started in 1871, the German Heinrich Schliemann found Priam’s Treasure, which discovery resounded across the world. However, Schilemann smuggled the treasure abroad. The excavations were later resumed by the American archaeologist Carl W. Blegen and then by Manfred Osman Korfmannile from Tübingen University. Since 2013, the excavations are led by Rüstem Aslan with a team from the Çanakkale Onsekiz Mart University. A national park since 1996, the ancient city of Troy and its vicinity has been admitted into the World Heritage List by UNESCO in 1998.

Last year the Ministry of Culture and Tourism announced 2018 as the Year of Troy, and the Troy Museum, the construction of which started in 2013, was opened. Today, articles from our country and the world, found during excavations made at the site of the ancient city of Troy, are being exhibited in this museum. The gold exhibited in the Istanbul Archaeology Museum, known as the worker’s treasure, as well as many articles found at Troy have been registered in the inventory. The gold articles that were smuggled by German archaeologist Heinrich Schliemann, and brought back from the US by the Republic of Turkey Ministry of Culture in 2012, having been in safekeeping in the Ankara Anatolian Civilisations Museum until recently are now in the museum. It is now the turn to bring back the treasures exhibited at the Russian Pushkin Museum…

We would also like to indicate that German archaeologist Heinrich Schliemann smuggled 8 thousand 831 articles abroad during the third period of his excavations. The articles were first taken to Greece, and then to Germany. Starting bargains with many countries, the archaeologist donated the articles to the Berlin Museum when he was not able to sell them. The articles that were lost during the Second World War turn up in Russia. It turns out that they were taken to Russia as spoils of war. Until today, we succeeded in bringing back through diplomatic channels many historical artefacts that were smuggled abroad some way or another. Not it is the turn of the treasures of Troy.

2020 European Museum of the Year Award Indeed, the Troy Museum, which attracted attention very soon after it was opened, is now the best place to exhibit these articles. In fact, in the recent months we found out from news agencies that the Troy Museum, which is located at the entrance of the 5000-year ancient city of Troy in Çanakkale and which was opened last year, became a finalist for the 2020 European Museum of the Year Award (EMYA). This news excited us all; with hope growing in our hearts, we said “That award will be given to us”.

The museum was designed by Ömer Selçuk Baz, who ranked first at the architecture competition held by the Ministry of Culture and Tourism. The museum is among the most ambitions museums in the world in terms of both architecture and the articles exhibited in it. It is a magnificent building with a three thousand-square metre exhibition hall and a closed area of 11 thousand square metres. The museum, where around 2 thousand articles are exhibited, offers modern storage facilities and laboratories. The articles on the ground floor belong to the Traos cities founded in Çanakkale in Antiquity. Troys layers are narrated on the first floor, the world in Antiquity on the second, and the history of the Troy excavations are related on the third floor.

The articles found at Troy, and the exhibitions continuing in the interactive exhibition halls end at the museum’s observation deck. The visitors are able to examine the geography in which Homer’s epics were set, with the help of an information panel. Along with the museum, the Tevfikiye Arkeoköy, the Troy Historical National Park and the Troas Culture Route lent the region a new face in terms of both tourism and cultural wealth. The route attracted, and continues to attract, great interest from domestic and foreign tourists.

Maybe, if Troy had not been told in the epics of Homer, which were committed to paper 2 thousand 800 years ago, and which are considered the building blocks of European literature, the historical identity of the region would not be handed down from generation to generation in such impressive language. Who knows?