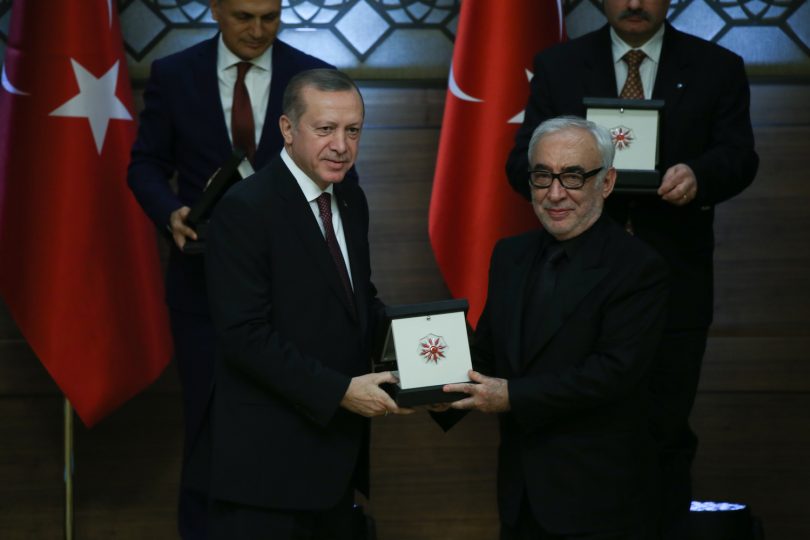 The master actor deemed worthy of the Presidential Culture and Art Grand Award, took the rostrum to speak. Everybody held their breaths, and the public focused on Şener Şen’s speech.

When names of masters who were deemed worthy of the Presidential Culture and Art Grand Awards were announced, one name on the list attracted the public attention. It was stated that the award in cinema category will be given to Şener Şen because he “expresses his social stand in the fine language of art through successfully representing the people of the country he was inspired by”.

All segments took interest when an actor, who have fitted many system critiques in his filmography, and boldly criticised politicians and governments in comedies he starred, was deemed worthy of this award. The public curiosity increased as his distant attitude towards politics and his charismatic personality that has won people’s favour combined with the psychological tension Turkey has experienced in recent years. The public awaited impatiently to witness the stand and speech of Şener Şen in the award ceremony.

Some claimed that this award would harm master actor’s filmography, some that Şener Şen would reject the award, and some that the famous actor would make a statement displeasing the opposing segments. When the expected moment came, 75 years old master actor who has devoted nearly 40 years of his life to acting, took the rostrum to make a speech. Everybody held their breaths, and the public focused on Şener Şen’s speech.

At this point, let’s rewind and remember the story of the great master who has endeared himself to the crowds holding different beliefs, thoughts and political views, and is widely acclaimed by society. Because what this grand award and what master actor’s speech mean, can be understood through telling and making sense of this story.

His is a life story that justifies Tolstoy who said, “Man makes plans and God laughs.” This journey in which he fitted numerous important films, awards, countless tributes, a great career, a respected personality honoured by the highest authority of Turkey, and the people’s love began on December 26th, 1941 in Adana. He is the son of Ali Şen, one of the most important character actors of Turkish cinema who was a carpenter in those years.

He realized how difficult life is at an early age. His education was hindered while in high school, he failed the class as a result, and decided to drop out of school also due to economic reasons. First he worked in a yarn factory, and later he decided to continue his education. He continued the evening high school, and graduated from here. Taking advantage of teacher shortage, he worked as a teacher in Muş between 1964-66 with a right bestowed in those years. As he tells in his interviews, the years he spent in Muş greatly contributed to him, and some memories left deep traces on his inner world.

As his father climbed up the celebrity ladder, young Şener who was still a teacher, had a different passion. He aspired to become a theatre actor, and embarked on his acting journey quitting the teaching profession upon his father’s encouragement. He decided to listen to his heart, and to make a name in theatre and not in cinema like his father. He went from door to door, so to speak, to realize his dream.

He got a lucky break, and his career began in Istanbul Municipality City Theatre. However he started at the threshold which cannot even be considered role. For a while he remained in the background in crowded scenes, sometimes accompanying a song, and sometimes dancing on the stage in some plays. Finally he began playing major roles in the theatre company he worked as an extra. He drew attention, and gained momentum in the field of drama he admired.

But the struggle for life badgers Şener Sen. It was a period when the country was experiencing political turmoil, economic uncertainties, and difficulties following memorandums. The obstacles remained strong in way of democratization, and the issues in country’s governance, civil-military disputes and polarization between different segments of the society continued to reflect on social life and economy. He was affected by social problems experienced, as most. Theatre company was not enough to make a living. He looked for new opportunities to earn a living. He decided to enter the industry of his father that was cinema going through its golden years, to stand on his own feet although unwillingly.

Just as was the case in the theatre, he entered the cinema after remaining in the background for a while. He worked on sets, and as an extra. An offer that followed a period of about 5 years, was the turning point of his life. He was featured in a film by director/producer Ertem Eğilmez famous for his reputation in the industry, the family environment he created around him, the stars he raised and his credibility in the society as well as his films. This was the first step in his transition from extra to supporting role he continued until 1984, but this was also the first step on the ladder to becoming a legend. It was the year 1975. The name of the film was Hababam Sınıfı, and the role Şener Şen played was “Badi Ekrem” that greatly influenced  the collective memory of Turkish society as well as the history of Turkish cinema.